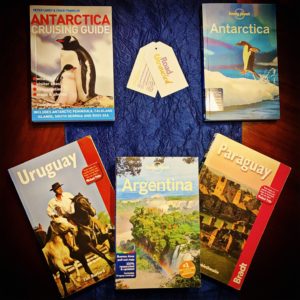 We’ve crossed off some major bucket list items on trips that have taken us to almost every continent in the world. Now, we can officially announce that we will be able to cross off that elusive seventh continent.

We will be going to Antarctica this year!

Our week and a half long cruise will take us from Ushuaia, Argentina to the shores of Antarctica where we’ll be walking on the ice, meeting the local penguins, and even spending an entire night camping on the continent!

One of our other bucket list items is to see the Aurora Australis, and while we understand it will be the peak of summer in that part of the world (which means we’re more likely to see the midnight sun, another awesome phenomenon), we’re still crossing our fingers and hoping to see some flickers of the southern lights.

The trip will also include a day or two in Argentina and Uruguay, so we’ll be aiming to fit a lot into a couple of weeks- but we are up for the challenge! We plan to write about each stop along the way, so in addition to Antarctica posts you can expect to find stories from our day trips to those locations as well.

We’ve been doing a lot of reading about what to expect on the trip and trying to learn as much as possible about Antarctica and the history surrounding this relatively untouched part of the globe. It was officially discovered around 1820, but it wasn’t fully explored until the 1890s. Another fun fact we discovered- Antarctica is home to the world’s loneliest ATM.

Here are a couple infographics about Antarctica that share some interesting facts about the continent. Take a look at the images below to learn more about this fascinating part of the world.


This is going to be an incredible, once-in-a-lifetime experience, and we’re extremely excited to tell our story, share our photos and document everything right here on Road Unraveled!

Now if only it were sooner! Then again, this has been at or near the top of our bucket lists for as long as we can remember, so what’s a few more months?

Have you been to Antarctica, Argentina, or Uruguay? If so, leave us a comment below and let us know your thoughts and recommendations!