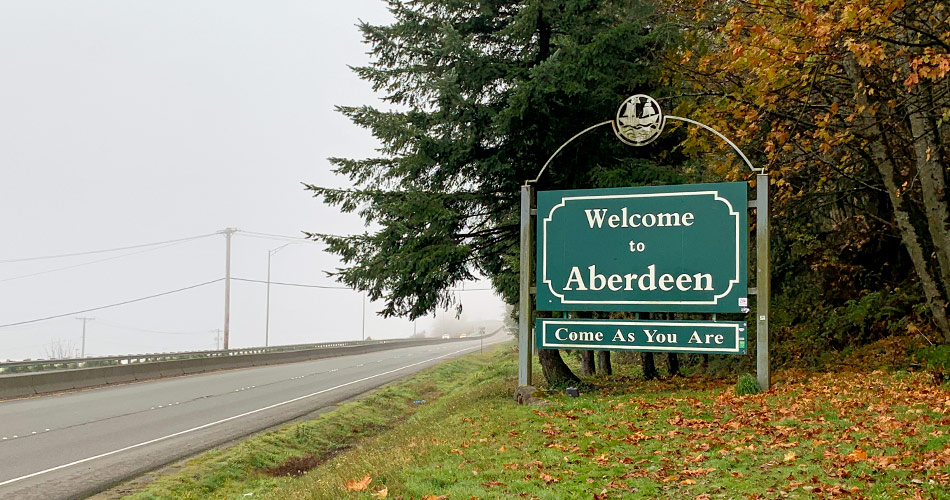 In the late 1980’s, a new style of music burst onto the scene and began to dominate the music industry. Led by bands mainly from the Pacific Northwest, the style of music would become known as “Grunge,” and Seattle, Washington was ground zero for the sound. If you are familiar with the 1960s “British Invasion” movement, the Grunge movement of the early 1990s was similar (though on a smaller scale), but it had just as much cultural significance. The influence from Grunge went beyond just the music industry: clothing styles popped up to match the flannel-clad, thrift-store attire of Grunge bands, and TV shows and Hollywood movies like “Singles” began featuring Seattle as their location. Growing up in the Pacific Northwest during the Grunge era had an enormous impact on me as well, even acting as motivation for me to learn to play the guitar and bass—and, yes, buy some flannel shirts and wear Doc Martens boots like the musicians who were so influential to me.

If ever there was an anthem for this new sound it would have been Nirvana’s “Smells Like Teen Spirit” from their 1991 album Nevermind, and the band’s frontman, Aberdeen, Washington’s own Kurt Cobain, would most likely be considered the face of the movement—albeit a reluctant leader. While Nirvana defined the early 90’s “Grunge” era along with Seattle-based contemporaries like Soundgarden, Pearl Jam, Alice in Chains, Mudhoney, and the Melvins, Cobain despised the term “Grunge” and was not a fan of the growing movement, feeling that it was more of a media-driven scene than anything organic or authentic. Nirvana’s music was a refreshing change of pace from anything that came before them, and they quickly became a worldwide success as one of the most popular bands associated with the Seattle Grunge wave. Then, in 1994, after years of fighting drug addiction, health problems, and personal issues, Kurt Cobain was found dead in his home outside of Seattle. The police concluded his death was a suicide.

The town of Aberdeen, Washington took some time to embrace their native son. Many of the locals initially found it difficult to celebrate Kurt Cobain in light of his addiction issues and drug-related suicide. Some residents cited negative comments he made about the town and his experience growing up there. However, in recent years Aberdeen residents, fans, and organizations have rallied together to recognize the legacy of the Nirvana frontman, and today they welcome fans of his music who make the pilgrimage to visit his hometown. In addition to declaring February 20th Kurt Cobain Day in celebration of his birthday, multiple landmarks and memorials have been added around town that celebrates Kurt Cobain and the impact his music continues to have to this day. If you are a Kurt Cobain fan, a Nirvana fan, or just a fan of Grunge or music history, here are a few reasons why Aberdeen, Washington might be a great spot to include during a Pacific Northwest vacation.

Our trip to Aberdeen was part of a recent visit to the Pacific Northwest. We started with a day in Seattle before driving down to Aberdeen, just under two hours away from the city by car. We arrived on a cold, foggy Sunday morning that could have inspired any number of Grunge songs. With many shops closed that morning, and with few cars on the road, the town felt sleepy under the weight of the misty haze and the ghosts of the music that originated there. It was also the perfect quiet morning to visit a few spots directly connected to Kurt Cobain and Nirvana.

The crown jewel of Nirvana landmarks in Aberdeen is, without a doubt, the Kurt Cobain Memorial Park. Also referred to as Kurt Cobain Landing, the location is right down the street from where the Nirvana songwriter grew up. Directly next to the park is the Young Street Bridge, and it’s said to have been one of Cobain’s favorite locations to hang out. In fact, Cobain wrote about the bridge in the Nirvana song “Something in the Way,” and the lyrics to the song are displayed on a plaque in the park.

Located adjacent to the muddy banks of the Wishkah River, Kurt Cobain Memorial park is a must-see for Nirvana fans. The site features Kurt’s Air Guitar stand, a couple of portraits and photos of Cobain, a large guitar statue, and graffiti that celebrates Cobain’s life and the legacy of Nirvana. You will also find a granite headstone with quotes from Kurt Cobain himself, including this gem: “My name is Kurt and I sing and play the guitar and I’m a walking, talking bacterial infection.”

Officially opened in 2011 by the Kurt Cobain Memorial Foundation, the park is a reflective space for Nirvana fans to pay respects and celebrate the legacy of the former Aberdeen resident. There is plenty of street parking available, but please remember that Kurt Cobain Memorial Park is located in a quiet residential neighborhood, so try to avoid doing anything that might disturb the residents during your visit—including asking them if they knew Aberdeen’s famous son. One resident, clearly tired of the same questions from countless visitors, has a sign in their yard declaring that they did not know Kurt Cobain, he never lived in that house, and they do not operate a gift shop. It’s a funny way of addressing a more serious issue: let the neighbors enjoy their privacy.

Kurt Cobain’s childhood home is just a few blocks away from the park, and it’s a short walk if you are interested in seeing the house where he grew up. The house is currently a private residence, so remember to be respectful and give the current owners their privacy.

Located on Wishkah Street, above the blue Moore’s Interiors building, an impressive 68-foot long mural pays homage to Nirvana, Kurt Cobain, and many of the influential bands from the Grunge scene and beyond. Local artists wanted to create a mural that showcased not only Nirvana but also the bands and musicians they drew inspiration from. Nirvana bassist Krist Novoselic was consulted for ideas and recommendations as it was designed. The mural is detailed and nuanced with elements hardcore Nirvana fans will connect with, and it’s a beautiful tribute to the band and their influences.

Downtown Aberdeen celebrates hometown heroes with a star emblazoned on the sidewalks. Similar to the Hollywood Walk of Fame in Los Angeles, California, you can discover the names of famous Aberdeen residents as you walk through downtown. Unfortunately, we couldn’t find a map that outlined all the names immortalized through stars, and we ended up walking around for about 15 minutes looking for the Kurt Cobain star before deciding to call off our search. We do know what the star looks like: it simply says Kurt Cobain, Lead Singer, Nirvana.

If you conduct your own Aberdeen Walk of Fame, stop into Tinderbox Coffee Roasters before you get started. We were warmed by cups of coffee as we trudged through the late autumn chill, which made the unsuccessful scavenger hunt a bit more fun. 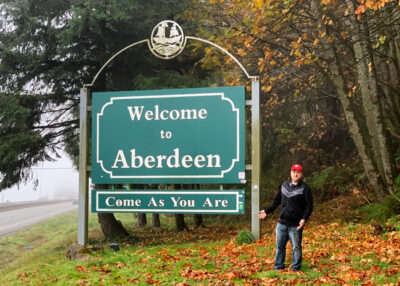 One of the official city welcome signs is adorned with the title of the song “Come As You Are” from the band’s Nevermind album. When you enter Aberdeen coming from the east along Olympic Highway (Highway 12), look for the sign on your right. There is no specific address for it, but we typed “Come as you are sign” into Google Maps and found its location accurately located on the map. You’ll even find a small pull off available so you can park your car and walk up for a couple of quick photos.

There is a great Nirvana and Kurt Cobain memorial in the Sucher & Sons Star Wars Shop in downtown Aberdeen. You’ll find a nice collection of memorabilia, collector’s items, and merchandise related to the late Nirvana frontman—as well as an amazing collection of Star Wars memorabilia. If you’re looking for a unique souvenir for your trip to Aberdeen, this might just be the place to find it.

Map of Nirvana Locations in Aberdeen

This map includes the location of all the places we mention in this post. We hope you find it useful if you’re planning to check out Aberdeen as part of your next vacation to the Pacific Northwest.

We visited the town as part of a road trip from Seattle down to the Oregon Coast, so we did not stay at a hotel. If you’re planning your own road trip to see Kurt Cobain’s hometown, you will find plenty of hotel options to choose from. We often use Booking.com to compare hotel prices and locations during our trips. Take a look at the deals below to see if they have any hotels that work with your travel plans!


Enjoy Your Visit to Aberdeen, Washington!

We had a wonderful time during our brief visit to Aberdeen. While the Nirvana-related sites were the main focus of our visit, we also enjoyed learning a little about the history of the Grays Harbor region, and we met some wonderful people along the way. Nirvana fans may know about the famed benches in Viretta Park, an unofficial memorial to the late Grunge pioneer near the house where he died in Seattle. However, for an official tribute, be sure to join the thousands of fans who make the pilgrimage to visit the locations around Aberdeen and see where Nirvana and the early roots of the Grunge movement began. To borrow a line from Kurt Cobain: come as you are, as you were. You will be welcomed. 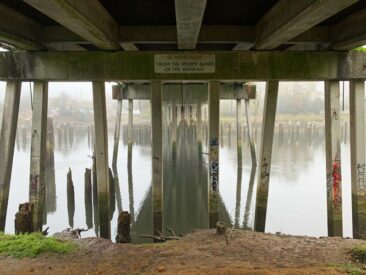 Underneath the bridge near Kurt Cobain Memorial Park 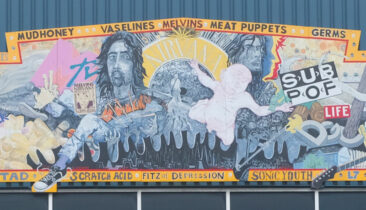 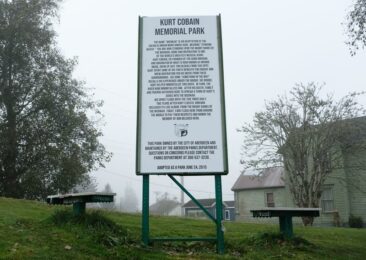 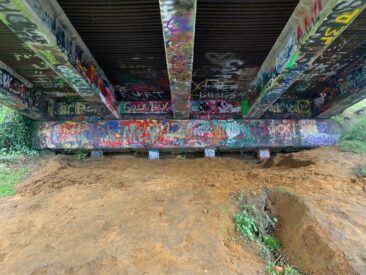 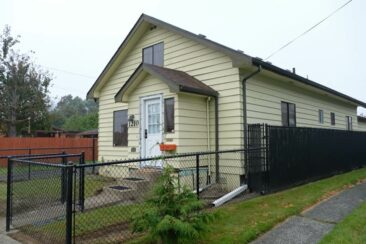 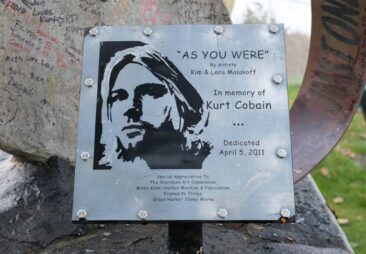 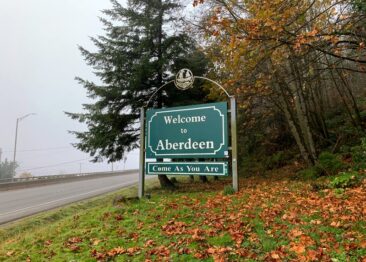 Welcome to Aberdeen: Come As You Are 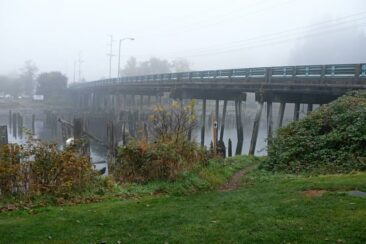 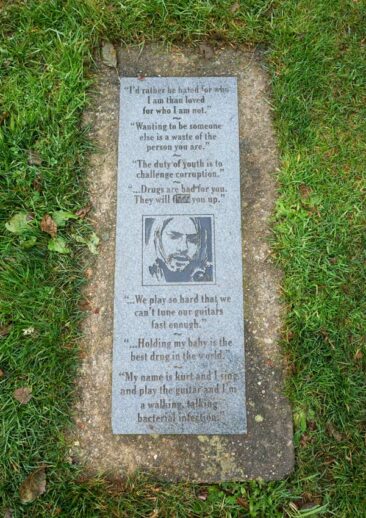 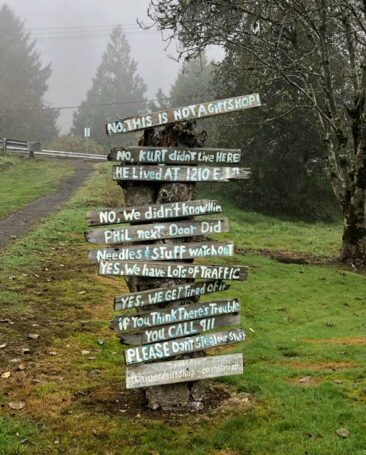 Kurt Cobain Memorial Park does not have a gift shop 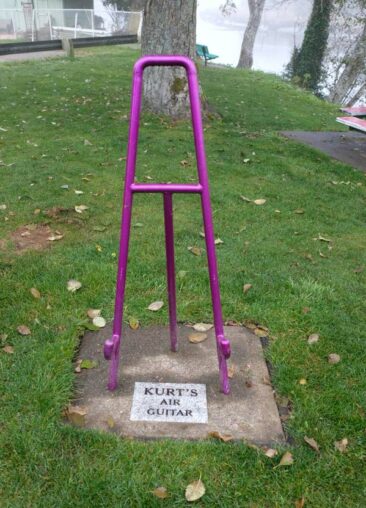 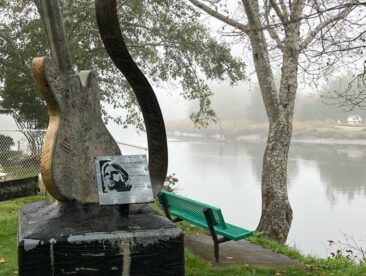 Want to discover a few more interesting places around the USA? Check out these articles! 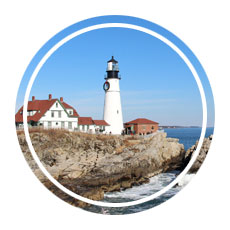 25 Things to Do in Maine 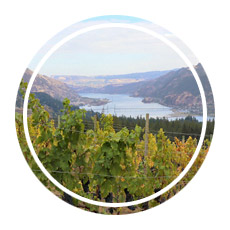 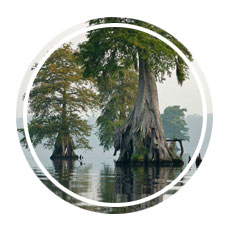 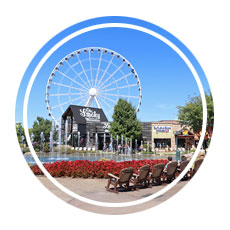 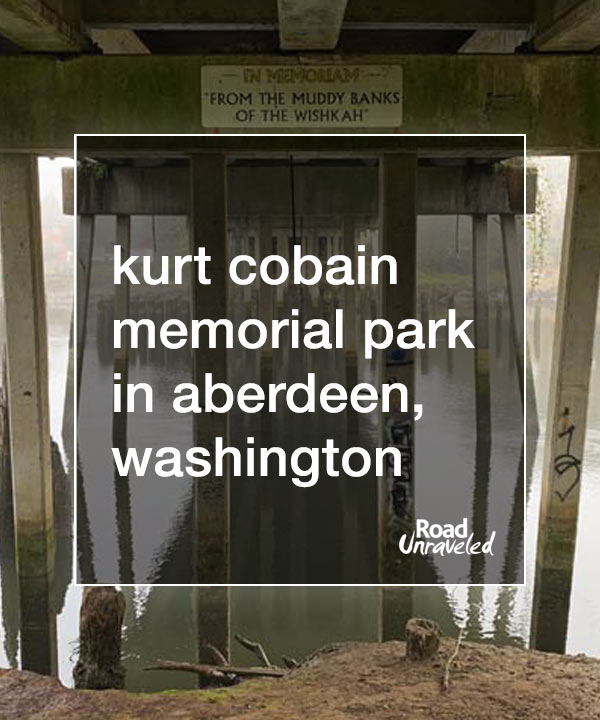